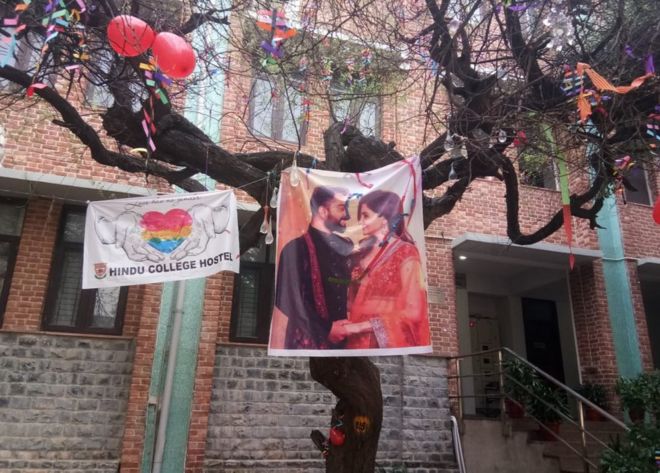 Female students at a college in the Indian capital, Delhi, are demanding an end to a ritual that sees male students hang condoms filled with water from a tree and pray to “curvaceous goddesses” in the hope that it will help them lose their virginity.

On Wednesday night, protesting students stormed the gates of the prestigious Hindu College, demanding the shelving of the “patriarchal” and “misogynistic” ritual.

For decades now, on Valentine’s Day male students have been hosting a puja (Hindu ritualistic worship) at the tree called the “Virgin Tree” or simply the “V-Tree”.

They hang balloons, colourful ribbons and condoms on its branches next to posters of the latest avatar of the goddess Damdami Mai – generally a top Bollywood actress or a model chosen by the students.

A male student dressed as a Hindu priest performs religious rituals, hundreds of students sing a hymn in praise of the “hot and sexy goddess”, prasad (food offering made to her) is distributed among the students who then dance and celebrate.

Over the years, a legend has grown that worshipping at the tree would help a student lose his virginity within six months.

In a largely conservative country like India where pre-marital sex is still taboo, many young adults believe nothing less than divine intervention will help them hook up.

Teli Venkatesh, the 19-year-old president of the boys’ hostel union which has organised the event this year, describes it as “some harmless fun”. He says it started “because people wanted to celebrate love” and that hundreds of students, including women, participate in the puja every year.

Female students, however, say the event “sexualises and objectifies” women and has no place in a “secular, intellectual” space like their college. They also point out that it’s only a few women who participate in the event.

“The male students pick an actress who is attractive enough to be labelled Damdami Mai and the puja reeks of Brahminical ritual practices of caste pride,” Aashi Datta, a 20-year-old undergrad student who’s at the forefront of the campaign to ban the ritual, told the BBC.

She says the event is held in a “hyper masculine, aggressive environment” and in past years, women’s participation was “not even 5%”. She’s right – a look at the videos of the day from past years shows only a handful of women in the crowd of male students.

Mr Venkatesh accuses Ms Datta of trying to “politicise” a college event and says that students who “enthusiastically participate” in the celebrations come from different states and belong to different religions and castes.

He also lists the changes they have incorporated this time to make the event more inclusive.

“Since this is about celebrating love, we are selecting a couple who are in a long-lasting relationship. To address the criticism that we are not just about heterosexual love, we are putting up pride flags and placards to celebrate the LGBT community. And we are hanging condoms to promote safe sex, bring awareness about sexually transmitted diseases and end taboos about sex.”

He also said that they would use a fully clothed photograph of the actress chosen as this year’s goddess and that the hymn lyrics had been rewritten to make it less descriptive of the female body.

Ms Datta and the other protesters, however, say nothing short of completely stopping this event will do.

“Legacy and tradition are not good enough reasons to continue with a festival. It’s a liberal college, we need to choose which traditions to follow and which ones to drop,” she insists.

On Tuesday, the two warring sides met, along with some professors, to find a way out, but the stalemate remains.

Prof PK Vijayan, who was invited by the female students to speak at the meeting, was a student at Hindu in the late 1980s when the virgin tree puja began.

“It started with courting couples sitting around the tree and so it came to be known as the lovers’ tree,” he says. “In those days, there was little awareness about Valentine’s Day in India. But over the years, the celebrations became more structured and the tree was festooned with condoms and posters of women regarded as beautiful.

“And then students began believing that eating the prasad would help them lose their virginity and the boys lined up for it and so did some girls.”

Prof Vijayan agrees that women’s participation in the festival is very low and says he’s heard some women say that they are uncomfortable with the way it is conducted.

But he says he’s not comfortable with “any type of puritanical ideas” and suggests that they continue with the celebration but modify it.

“I think the female students should be more flexible and instead of demanding a ban, they should take it over and redesign it the way they want to.

“Unfortunately, at the moment it is done as a celebration of machismo. It should be made more inclusive so that women could participate as those who also desire, and not just as the desired.”