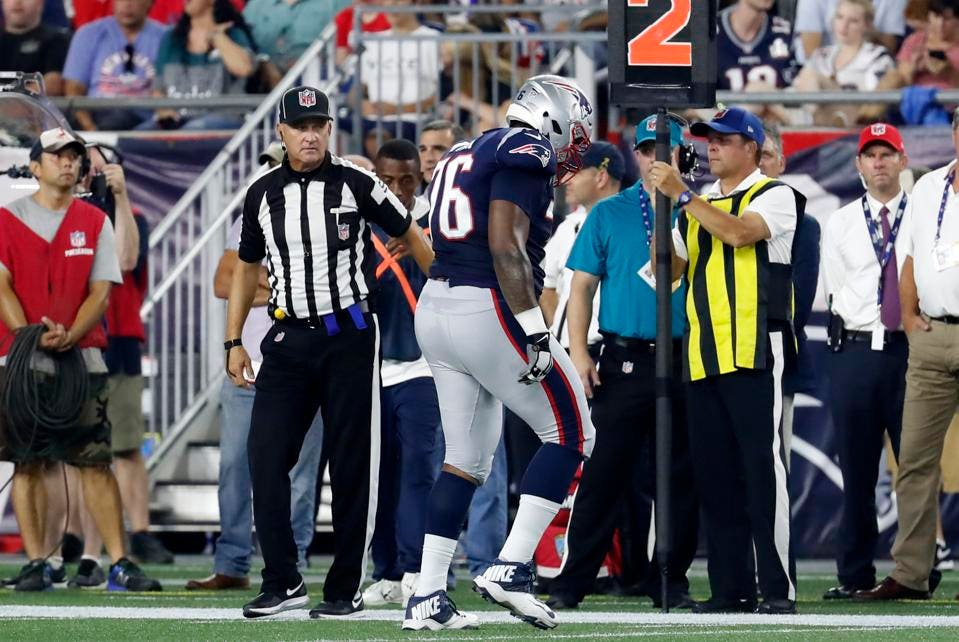 Isaiah Wynn, taken No. 23 overall in the 2018 NFL draft, saw his rookie season with the New England Patriots end before it began. (Photo by Fred Kfoury III/Icon Sportswire via Getty Images)GETTY

What was supposed to be Isaiah Wynn’s rookie year ended on a Thursday night in August.

It ended on his ninth preseason snap.

Wynn had subbed in at right tackle for LaAdrian Waddle to begin the New England Patriots’ second offensive series against the Philadelphia Eagles. But the Georgia product, taken No. 23 overall in the 2018 NFL draft, would stumble out of the exhibition at Gillette Stadium with more than three minutes still to play in the first quarter.

Wynn then took a cart from the sideline to the locker room to be evaluated for what the team announced as an ankle injury.

One that was soon learned to be a torn left Achilles.

And like that, the Patriots were left to go forward with a 6-foot-8, 380-pound bookend acquired the morning after Wynn was.

Fitting how things worked out.

Trent Brown, who’d started 26 games at right tackle for the San Francisco 49ers dating back to 2015, is now scheduled to become an unrestricted free agent at 4 p.m. ET on March 13. He’ll do so having started all 16 games for the Patriots last regular season on the left side. And he’ll do so having allowed three sacks, 12 quarterback hits and 20 hurries in the process, according to Pro Football Focus. 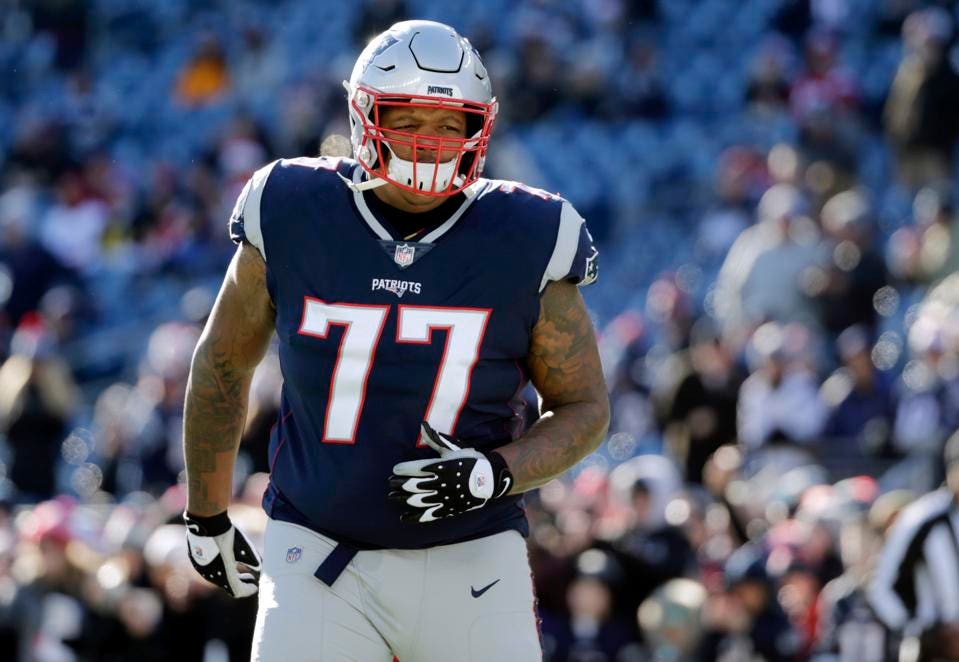 Trent Brown, acquired less than 24 hours after the first round April’s NFL draft, went on to start every game at left tackle for New England in 2018. (AP Photo/Elise Amendola)ASSOCIATED PRESS

Not a bad turnaround. The Patriots traded No. 95 overall to the 49ers in exchange for the $1.9 million left on Brown’s rookie pact and No. 143 overall in late April. San Francisco used the third-rounder on Southern Mississippi defensive back Tarvarius Moore that Friday evening, while on Saturday, New England took Purdue linebacker Ja’Whaun Bentley with the fifth-rounder.

As for Brown, the 25-year-old finds himself set to receive a Super Bowl LIII ring following a campaign in which he logged 1,089 downs by the end of December, then stayed in the offensive huddle for every down from January into February.

It is fair to say Brown will only be back if another member of O-line coach Dante Scarnecchia’s starting five is not. But Wynn isn’t leaving the foundation. There is a good chance longtime right tackle Marcus Cannon, who is under contract through 2021 with kind cap numbers of $7.45 million, $7.75 million and $6.35 million, per OverTheCap.com, isn’t either.

Brown should see offers that test New England’s cap capabilities next month. Whether the Patriots, currently projected to carry $18 million in room, would part ways with the 30-year-old Cannon to make a competitive offer to Brown remains to be seen.

There is defensive end Trey Flowers to pay, too.

In terms of New England’s investment in Wynn, worth $11.4 million over four years with an option for 2022, it has already been filed. He was the top asset the war room received in return from the Los Angeles Rams for wide receiver Brandin Cooks last spring. He is the third offensive lineman the Patriots have drafted in the first round since Bill Belichick arrived as head coach in 2000. 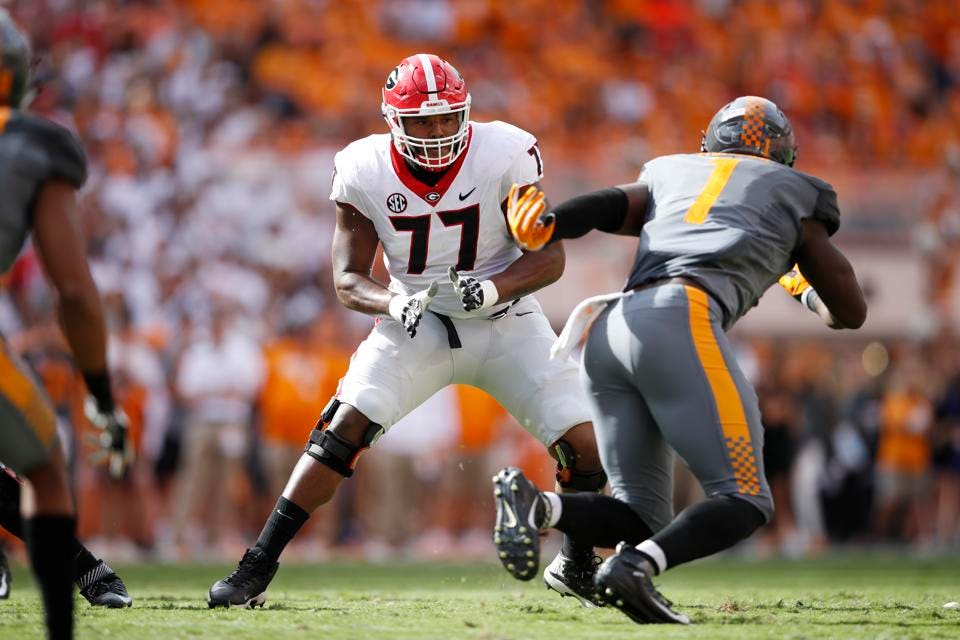 A team captain and first-team All-SEC selection in 2017, Wynn finished his tenure at Georgia having appeared in 51 career games. (Photo by Joe Robbins/Getty Images)GETTY

Those blockers preceding Wynn over the initial 32 picks? Logan Mankins out of Fresno State in 2005 and Nate Solder out of Colorado in 2011.

Wynn, listed at 6-foot-2, and 310 pounds, was a team captain, a second-team All-American and a first-team All-SEC selection for Georgia one autumn ago. He started 15 games at left tackle as a senior, 12 games at left guard as a junior and, between the inside and out, a total of 13 games as a sophomore.

PFF held Wynn responsible for four sacks over the course of his 51 career games in the SEC, and just five QB pressures during a 2017 he finished with a torn labrum. The 22-year-old was named offensive lineman of the week at the 2018 Reese’s Senior Bowl.

It’s easier to see what it looks like now.

Even if Brown hadn’t been viewed as a starting NFL left tackle before 2018. And even if Wynn hasn’t played in an NFL game beyond August.