Srinagar, India (CNN)At least 37 people were killed Thursday afternoon when a bomb exploded near a convoy of Indian paramilitary personnel in Indian-administered Kashmir, one of the deadliest attacks in the disputed region in recent years.

Bharat Bhushan, spokesperson for India’s Ministry of Home Affairs, told CNN Friday that 37 soldiers had died, with five wounded.
Earlier reporting from CNN affiliate News 18 had the death toll at 40 but has since revised down to 37.
The convoy, which was transporting members of the Central Reserve Police Force, was on the national highway when it was struck by a blast from an improvised explosive device, said Muneer Khan, the state’s director general of police.
“One vehicle which was part of the convoy carrying the CRPF personnel bore the brunt of the blast resulting in multiple casualties,” a police statement said. 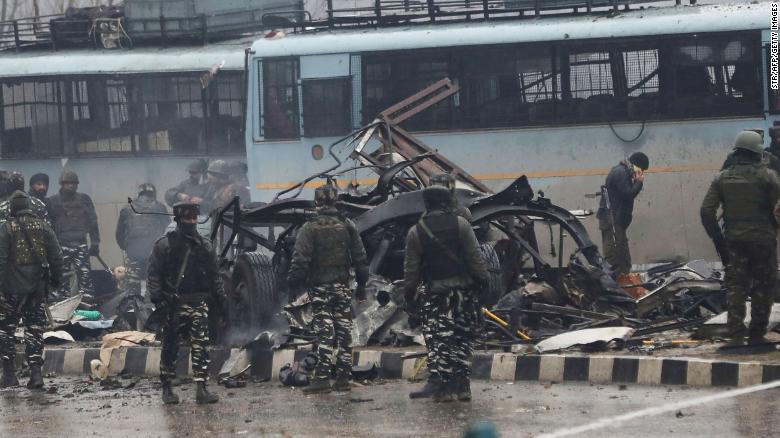 Indian security forces inspect the scene of an attack on a paramilitary convoy.
The Indian government has blamed a Pakistan-based terrorist organization for the attack. “This heinous and despicable act has been perpetrated by Jaish-e-Mohammed,” India’s foreign ministry said in a statement.
“The Government of India is firmly and resolutely committed to take all necessary measures to safeguard national security…We demand that Pakistan stop supporting terrorists and terror groups operating from their territory and dismantle the infrastructure operated by terrorist outfits to launch attacks in other countries,” the statement continued.

Pakistan’s Ministry of Foreign Affairs released a statement hours after the attack, describing it as “a matter of grave concern.”
“We have always condemned acts of violence anywhere in the world,” the statement said. It continued: “We strongly reject any insinuation by elements in the Indian media and government that seek to link the attack to Pakistan without investigations.”
Jaish-e-Mohammed, which translates to the Army of the Prophet Mohammed, is a Pakistan-based group that operates on both sides of the border of the disputed state. The group, which has been designated a terrorist organization by the US State Department since 2001, seeks to unite the Indian-administered area of Kashmir with Pakistan.
The attack took place in the Pulwama district — about 15 miles (25 kilometers) from Kashmir’s capital, Srinagar.
Local media reported that militant group Jaish-e-Mohammed had claimed responsibility in a video statement circulating online. However CNN has not independently confirmed the authenticity of the video. 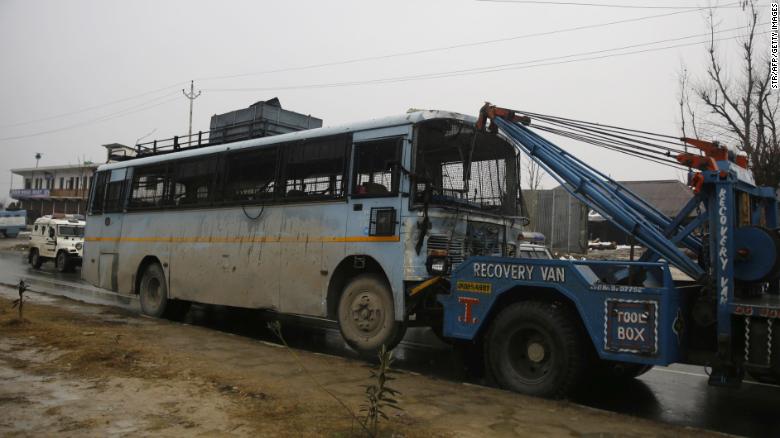 A damaged bus is towed away following the attack.

India’s Prime Minister responded to the attack and tweeted his support for soldiers in the state.
“Attack on CRPF personnel in Pulwama is despicable. I strongly condemn this dastardly attack. The sacrifices of our brave security personnel shall not go in vain. The entire nation stands shoulder to shoulder with the families of the brave martyrs. May the injured recover quickly,” said Narendra Modi in a tweet.
Modi has taken a stronger stand towards terrorism in the state since he came to power almost five years ago. In 2018, 253 terrorists were killed by Indian security forces — more than double the number of terrorists killed in 2015, according to the Ministry of Home Affairs.
India’s finance minister, Arun Jaitley, also condemned the attack: “Attack on CRPF in #Pulwama, J&K is a cowardice & condemnable act of terrorists. Nation salutes martyred soldiers and we all stand united with families of martyrs. We pray for speedy recovery of the injured. Terrorists will be given unforgettable lesson for their heinous act,” tweeted Jaitley. 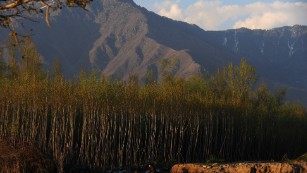 India and Pakistan’s Kashmir dispute: What you need to know
Kashmir has had a tumultuous history ever since the India-Pakistan partition — which resulted in a predominantly Hindu India and a Muslim Pakistan.
After India gained independence in 1947, Kashmir has been bitterly contested by both India and Pakistan, resulting in three wars between the two countries and numerous other skirmishes.
The attack on Friday comes more than two years after armed militants entered an army base in the garrison town of Uri, about 63 miles (102 kilometers) from Srinagar — killing 18.
Separatist violence in the region has killed more than 47,000 people since 1989, although this toll doesn’t include people who have disappeared due to the conflict. Some human rights groups and nongovernmental organizations put the death toll at twice that amount.
[“source=cnn”]