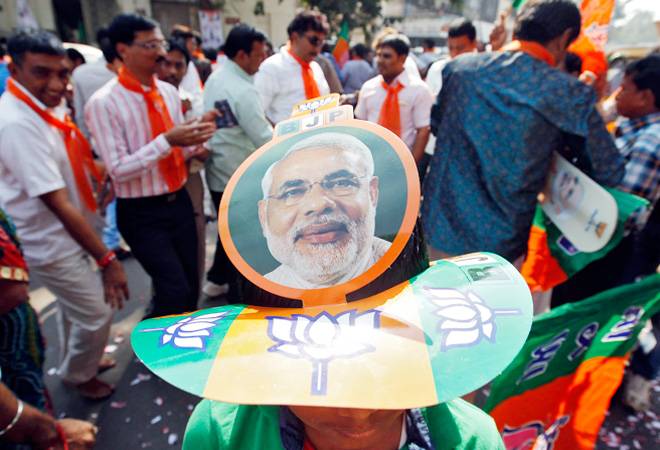 The exit polls results, which have indicated a victory for the BJP-led National Democratic Alliance (NDA) in the Lok Sabha elections 2019, are likely to have a positive impact on stock markets when the Sensex and the Nifty open on Monday morning. According to exit polls results, the Narendra Modi government is all set to come to power in the country with even bigger margin than the 2014 elections. As per India Today-Axis My India Exit Poll, the Bharatiya Janata Party (BJP)-led NDA will win around 339-365 seats, while the Congress party will be reduced to 77-108 seats.

The equity benchmark Sensex may cross the psychological level of 40,000 if Modi-led BJP government manages to win 300 seats out of the total 543 seats in the 2019 Lok Sabha elections, according to market experts.

“If BJP clinches 300 seats or more then the current regimen will continue and that will provide certainty for business community about the policies to continue. Impact on Sensex from this result will be positive and it may hit 40,000 due to euphoria, on the declaration of result or even on exit poll results,” Romesh Tiwari, Head of Research, CapitalAim told ETNowNews.com.

Some experts are of view that the Indian equities may be indecisive until the final outcome of the general polls on May 23.

“This week there is an event that is able to produce long-term trends in the market and is the factor that sets the tone for wealth creation. The political events like election results usually produce trends that last for years. Hence, it becomes very important for the economy and investors,” said Mustafa Nadeem, CEO, Epic Research, reported news agency PTI.

The stock market can witness sharp movement but the exit polls bring some decisiveness on the table as well, he added.

Jimeet Modi, Founder & CEO, SAMCO Securities & StockNote said,”This week is going to be the most happening of the year wherein all eyes would be glued to not “stock quotes” but “vote quotes.” Speculation is that NDA is expected to gain upwards of 300 seats and if it does the best scenario is that markets will test 11,800 and thereafter correct. However, a negative surprise would cause a 1-time massive knee-jerk reaction and markets can tank upto 10500-10000 levels. It would be profitable for traders to take contra bets on either side and investors should ideally be silent spectators and let T20-20 pass-by while at the same time, if panic sets in, keep a shopping list ready with companies from sectors such as financialization, consumption and FMCG which are reasonably priced.”

Global brokerage firm Morgan Stanley sees Sensex hitting 42,000 by December 2019 in the base case, with a 20 per cent and 25 per cent upside in rupee and dollar terms, if the voters elect a stable government at the Centre.

Joseph Thomas, Head Research at Emkay Wealth Management said, “The exit polls broadly indicate a greater probability for the return of the current dispensation for yet another term. This may be good from the continuity perspective as far as basic economic and social policies are concerned.”

The BSE Sensex gained 815 points in the last two sessions ahead of exit poll, and Nifty saw a rally of 250 points during the same period, on hopes of the Modi government winning the elections next week. Sensex and Nifty have rallied 10 per cent from February lows till April 18 when they hit record highs of 39,487 and 11,856.

However, foreign portfolio investments this year have been tepid in the run up to the Lok Sabha elections with Rs 11,182 crore in February and Rs 16,728 crore in Indian markets in April. March saw a spike with Rs 45,981 crore. This can be attributed to uncertainty over the election results as well as global factors such as the US-China trade war.